It is an excellent novel reading app that covers all sorts of .novels and updates them in a fast pace.

The Sea of Novels

-They have loads of copyright books of limitless types——romance, fantasy, werewold, vampire, mystery and so forth.

This work is a true, factual story that reads like a romantic novel…which it actually is. Graham and Karen were both on the Plenty of Fish (UK) dating site. Karen lived in Southampton with one of her two sons and worked in a local primary school whilst Graham lived in the rural Alentejo region of Portugal. Both had been on the PofF site a little intermittently over the years but one fateful February evening, Karen was browsing the site and a humorous poem Graham had recently drafted on his profile caught her eye. She sent a short message to him, which was appreciated, reciprocated and the rest, as they say, is history, their romantic history.

An online flirtation developed, which led to Karen visiting Graham on holiday during her Easter break and a full blown romance followed which has eventually led to Karen leaving her job and her family in the UK to join Graham in Portugal. The book tells the story including the ups and downs of this event, has extracts from emails and texts which flew between the two and captures the warmth, humour, difficulties and love that saw them achieve their dreams.

Plenty of Fish in Portugal paperback available on Amazon.com

PLENTY OF FISH IN PORTUGAL

This book is about a girl named Kiara. She is new to Hyderabad city and she is working here. To get over her forlornness she joins Tinder app in hope of meeting her Prince Charming. This book underlines her 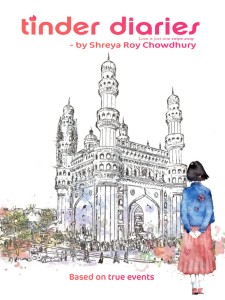 Through this book I want to convey about a girl’s wants and needs in the romance department. It brings into the light how a young lonely girl searches for her soulmate. The book also highlights the modern dating and how youngsters deal with the relationships. Its all about love, fear, insanity, lust, honesty, friendship and rejection. All the youngsters will be able to relate with my book.